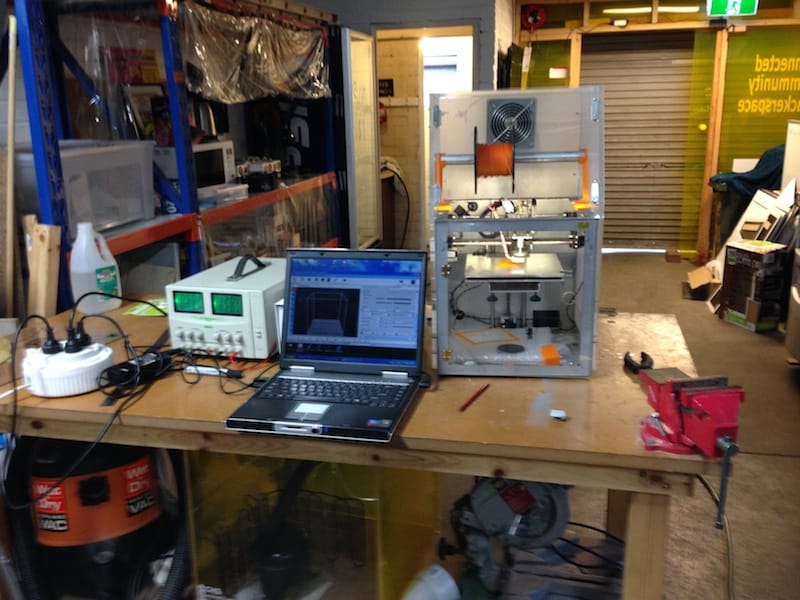 A few months ago, I start a large 3D printing project using ABS. One of the side effects of this project is that the spare room I use as my printing area now smells of heated ABS. The fumes attached themselves to everything! The curtains, the carpet, the bedding, everything!! After that, I needed to find a better way to use my printer without contaminating the area.

My 3d printer is a work in progress. The latest step was to put an enclosure case around the 3D printer and create a venting system to keep the fumes away  and exhaust them outside the house.

When I spoke about the issue with Gavin Jackson from the CCHS, he surprised me with a huge piece of 10mm acrylic which was used as a sign outside of a factory. Gavin noticed that they had dumped the sign in the trash, and was kind enough to grab it for this project.

After sitting down and sketching out the plan “Mythbusters” style, we started out cutting up the acrylic with a radial saw, a first for me! I always feared cutting off my hands using one, but with a little instruction, we were slicing up this piece into manageable pieces. 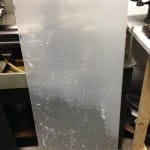 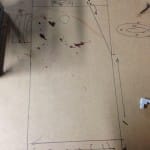 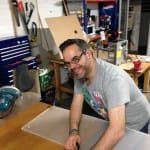 Getting ready to cut down the acrylic

The sides needed a little bit of work to fit. Holes were cut into the bottom of the sides for airflow with the laser cutter at the CCHS. Then we needed filing, shaping the slots for the adjustment bolts and motors. It took some time drilling and filing, but in the end, we were able to mount the sides flush to the case. 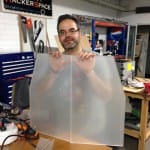 Sides cut and ready to go to the laser cutter 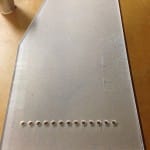 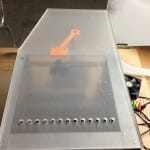 Sides checked for placement on the Superdoodle

Once the sides were measured,checked and attached, the next step was to start working on the top of the case. Our idea was to mount an 110mm exhaust fan at the top to draw out the fumes. The top is also where the filament is stored, so I wanted an easy way to get to that area. My original idea was to put a hinge on the lid and create a flip top lid. But before we got to that stage, we needed to build the enclosure.

After cutting the pieces, Gav and I sat down to work out how to attach all the pieces. Gavin came up with the answer, and in less than an hour, all the sides came together, and the case started to take shape.

Before attaching the back piece, we took the back piece to the laser cutter and used the laser to cut the hole for the fan. The laser needed to cycle three times to get through 10mm of acrylic, but if you need a clean cut, there really is no other way. 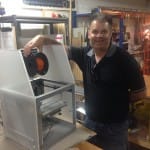 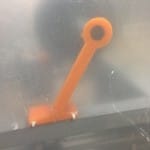 Drilling pilot holes for the brackets 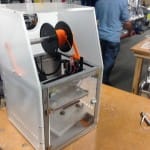 Added the back and the top of the case. Things are coming together

All put together, we needed to look at the front lid for the filament. After trying a hinge system, I realised it was not going to work. After a quick trip to the hardware store, I ended up using some magnetic latches to hold the plate in place. It took some work to align, but now it sits flush, and can be taken off. Access to the filament holder and hot end is easily accessible. 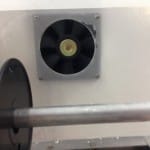 Fan installed high in the hot of the case, to vent away fumes! 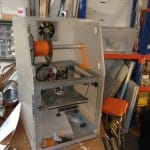 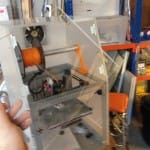 Magnetic lid taken off with one hand. Full access when I need it for filament changes and hot end.

The last step is to wire up the fan, which was done by piggybacking the leads into the power pack using banana leads. Sometime in the future, I would like to control the fan from the controller board, but I need to get a MOSFET together for that.

This was a huge step to getting the Superdoodle to a point where I could make her my main 3D printing workhorse. I’m very happy now that I can run the printer and vent the fumes outside of the house.