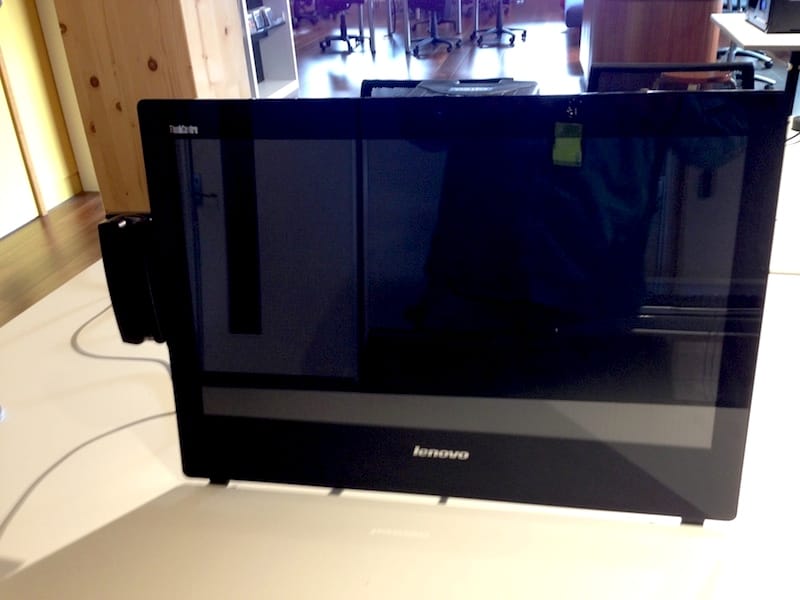 This has been a very busy time for me at work, organising a new Makerspace at Kathleen Symes Library, and some new maker skills classes that will start next month, but some of the best , and most challenging tasks at work sometimes comes right from left field. So when the IT department sent me an email asking me to 3D print some scanner mounts, I had to ask… what is a scanner mount?

After some interesting discussion, it seemed that the library service had a number of USB scanners for membership cards that needed to be mounted to the side of some very funky looking Lenovo PC machines. One of the striking features of this machine is the 45 degree side panel, which was where they wanted to mount the scanner. We all know that 3D printing is a snap. So why not print the mounts?

Great thinking, but one of the biggest drawbacks I have come to discover is that when a new technology becomes available, everyone expectsit to be the be all for getting any result.

I ran into this thinking a lot in the film industry when 3D graphics and computer generated imagery was making a splash after Jurassic Park and the Star Wars Prequals. Everyone wanted to do everything with Greenscreen mattes and the render a 3D images. I remember consulting on a short film, where in a magic carpet dream sequence they placed the actor on a green box and had him act out the scene. After three months of trying to get a CGI image to blend into the acting scene, the Director gave up, and allowed me to re shoot the scene again. Taking a carpet, some fishing line, some crew, and the same green box, we shot the whole scene in camera and after three takes, has the sequence complete, even which the fluttering tassels. CGI is great, but if you can do it for real, it’s faster and cheaper.

And this was my thinking with these Scanner mounts. I could spend a lot of time trying to match a perfect angle in CAD, then spend another two hours printing out each mount. But what if I could make five of them in under the time it took to print one, without the design time?
Going back to the IT team, I proposed we used some HIPS (High Impact Poly Styrene) sheet, and a heat gun to match the angle. This meant that I could heat form the pieces by hand, and make sure that each one comes out cleanly. 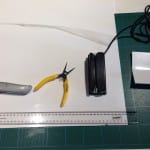 Tools and supplies for the scanner mounts 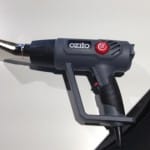 Trusty heat gun. No need for a fire 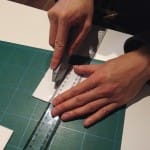 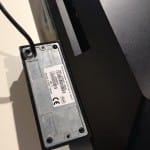 I love HIPS plastic and was introduced to it by a old friend who used it to make costume armour and helmets. The stuff is versatile, strong, and can be shaped. What I love even more, is that it can be scored and snapped, leaving a very clean edge which makes cutting up the material fast and clean.
So with Zon from IT, we headed into the makerspace, armed with plastic sheeting, a Stanley knife, and a heat gun. With the scanner and the computer, we cut the plastic to shape and then bent the warmed plastic to the same angle to match the slope on the side of the computer. It was really refreshing to do this by hand, and in an hour, we had five mounts ready to go back and be fitted and tested. 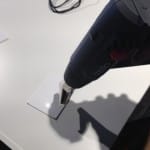 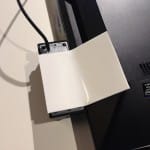 Shaping the heated plastic and checking the fit to the computer 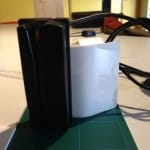 Mocking up the mount and setting up a plan

Zon looked happy, but I could see something was troubling him. When I asked, Zon explained to me that the plastic was white, while the computer and scanners were black. They would stick out bringing attention to the mounts.

“Could we paint them?” he asked.

I have used this stuff before, and painting was a task in itself. I would have to sand, prince, then paint the pieces so the paint would stick well, and then there was a good chance that they may scratch easily. 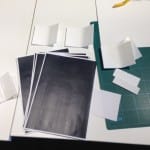 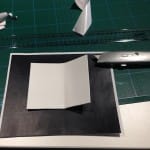 Mesuring out the black stickers 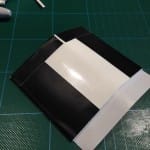 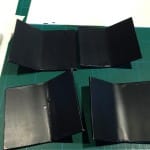 All four wrapped and ready

After some quick reasoning, I ran to the office and grabbed some full sized adhesive sheets I had brought in to make labels. Using the office printer, I printed out five sheets filled with black that could be wrapped around the mounts and stick to them. In short work, we were able to colour in the mounts and have a uniform finish. 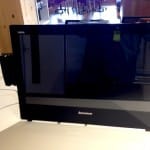 Testing the mount for position 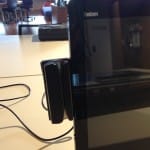 Close up of placement test 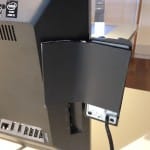 Bluetac mounting test. The final application will be in line

This was a really fun project that also shows that workflow has a great effect on working out the best way to get a result quickly and cheaply. There is no question I could print out these mounts on a 3D printer, but if you have ever created a design from scratch, you know there are revision work to get the piece spot on. Using some plastic and some heat, we got the job done fast, quickly and accurately.