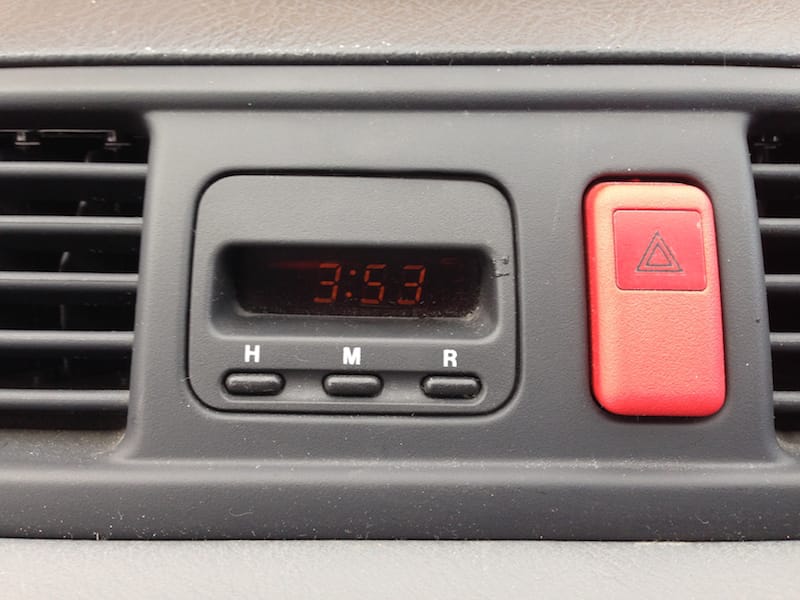 Working hard at the Library, I got a surprise phone call from an old friend with some great news. “I bought a car,” he told me, a smile in his voice. “Only issue is that the clock in the dashboard doesn’t work. I was thinking you might have some time to take a look…”

Well, I know when I have been cornered. Sharing all my technical creativity has me as the first port of call for anything that may be electrical or technology driven. With a smile, I made a time and he brought his car over for me to take a look at.

Before arriving, I did a quick google search and discovered that there was a frequent problem in this model of car and thankfully there was a trick to getting the clock unit out of the dashboard. It seems that over time, the surface mounted capacitors have an issue where they have been soldered onto the board. So with two pairs of pliers and some help, we were able to pop the clock free from the dash and dismantle it from it’s housing. 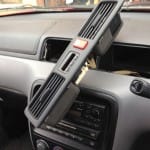 Pulling the panel form the dashboard 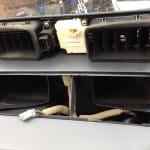 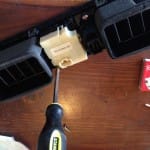 Removing the clock unit from the panel.

The clock itself is a very basic digital clock, the same circuits that were used in digital watches in the 80’s. This one had no alarm function, but allowed you to set the time. My first observation was the size of the surface mount capacitors on the board. These were HUGE. I had never seen anything like them before. I was worried I would have to go to the Connected Community HackerSpace and use their Electronics lab to do surface mount work, but with the size of these components, a normal soldering iron tip would do. 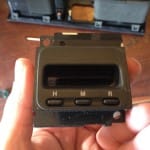 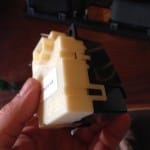 Now to separate the housing. Darn it! 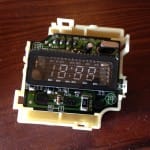 Taking a closer look, I realised that the solder joints were dry and that one of them had completely fallen off the board. I can only guess that in 13+ years of driving, the vibration had caused the solder joint to break away. This would explain why when I went looking for information, this issue was well documented by the Honda community.

Grabbing my gas powered soldering iron, I went around to all the components and touched up the solder joints, adding some more solder to reinforce the joints. When I got to the second large capacitor, it fell away as I applied heat to the bottom joint. As it hit the floor, I realised where the issue had been. The upper join, (which was tucked behind the LED display) was no longer on the board. This also explained why the clock would work intermittently when you tapped on the console, the connection was being made then broken as the car drove around. 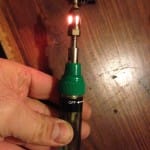 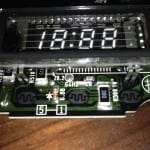 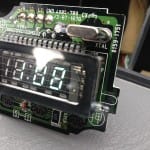 Back to the car for a quick test, it works!

Re-soldering the cap to the board, I finished touching up the other connections and then headed back to the car to power up the unit. After reconnecting the clock to the car, we were disappointed to find that the clock didn’t power on… till we realised we had not turned the car on! Simple things seem to always get in the way of an excited test. Turning the key, the clock turned itself on and, after a quick drive around the block, we resembled the dashboard. 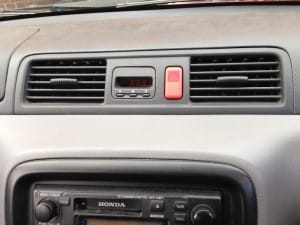 Everything reinstalled and back together. Look, the time!

It’s been a few weeks now and I got the report that the clock has been keeping the time with no power errors. A simple answer to do with basic soldering skills and something I was happy to apply outside my usual creative sphere.

This week, I got another call from my friend. “Hey, Gil, can we wire my iPad and embed it into the dash of my car…”