I get asked all the time why a large number of my personal projects seem to be based around futuristic technology found in film and television. It is no surprise that I have had a lifetime love affair with cinema, especially films in the science fiction genre.

There is a strong link between imagination and invention and fiction has lead to the inspiration of some of the technology we take for granted today. Computers, Cell Phones, MRI scanners, Aeroplanes, and Spacecraft are just some of the things dreamed up to become reality as science and invention caught up.

So when I saw this video pop up with my mentor Andrew Probert, I just had to share it with you. Andrew and I have spent countless hours discussing technology, film, and what it would be like to create what we both love to watch on the screen. As you will see, Andrew had spent his career creating  some iconic technology, and on occasions, his designed had been the basis for research into real world solutions. His Airlock design for Star Trek : The Motion Picture was studied by NASA as a possible airlock design for the International Space Station.

But enough from me. Here is Andrew talking about imagination and invention for STEAM (Science, Technology, Engineering, the Arts and Mathematics) Second. 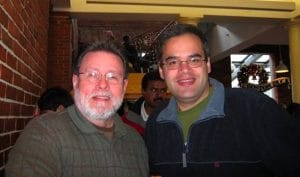 Andy and Gil during a visit to Boston